Home >> Gadgets Review >> Samsung Galaxy A5 and A5 Duos Review

Samsung Galaxy A5 and A5 Duos Review

Samsung’s newly found love for “premium build” is spilling down the ranks and if the new A-series get half the love and attention the S-line has been getting, it will be a job well done. The South Koreans are right to try and stir things up in the midrange to turn declining profits around. Flagships are to be admired from a distance, the average user would think, and spend their cash on gadgets that are simpler, safer and more affordable. 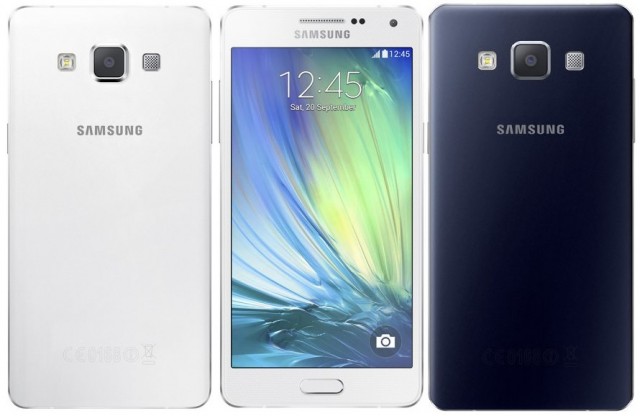 Now, we’re not sure we can call the Samsung Galaxy A5 “simple”, and “affordable” is very much in question too, as the recently reviewed Galaxy A3 will testify. But slim, sharp and good-looking go without saying.

Visually, the Samsung Galaxy A5 is even sleeker than the Galaxy A3, in no small part because its bigger size makes it look even slimmer and more cutting edge. Otherwise, both offer a white-painted metal frame, a razor thin profile, and a pearl-like finish of the back cover. The Galaxy A5 however has a bigger, 5″ Super AMOLED display and a beefier 13MP camera to show for its higher price tag.

Snapdragon 410 is more befitting cheaper, lower midrange devices
It’s comparatively pricey for the hardware features offered
On the Dual-SIM version you can’t have both a secondary SIM and microSD card inside
Battery is non-removable

When Samsung launched the Galaxy Alpha we all thought they were proving a point – there, we can make handsome metal phones too. In hindsight, the Alpha is obviously more than just a preemptive strike against Apple’s iPhone 6. Perhaps the beginning of Samsung’s new strategy: make the same smartphones people love and buy, only make them look better on the outside.

In light of the recent reports of dropping sales numbers, we can’t really say whether the new design philosophy is working out for Samsung or not. But we do like the new gloss-free design and quality finish combining aluminum and steel.

Samsung may have lost some of their grip on the market and looking at better-built products to get back where they were. But while everybody loves a good-looking phone, rivals like Motorola and Sony are offering cheaper midrangers with comparable features. Windows-powered smartphones are usually more affordable, not to mention the bargain-basement prices of the likes of Huawei and Xiaomi.

Of course there are always users willing to pay a little extra for the better build and that’s what Samsung’s betting on. And it might as well pay off, as the Galaxy A5 is one of the most popular phones on this website.

But the Samsung Galaxy A5 is more than just a precious toy. Hidden under the cold, precision-engineered exterior are quality internals. Imaging is dully covered by a 13MP camera, which made a solid impression just weeks ago at CES. Selfie fans will cheer the 5MP shooter on the front – that’s more than the Samsung Galaxy Note 4 has on tap.

The Snapdragon 410 chipset won’t offer revolutionary performance, but it has the future-proofing of the 64-bit architecture and it’s just waiting for app developers to catch up.

The display is ample in size, with good resolution and Samsung’s Super AMOLED technology known for superb contrast and vibrant colors.

Finally, there’s a 2,300mAh battery that should keep the A5 better covered than the Galaxy Alpha, which wouldn’t win any battery endurance competitions.

All of the aforementioned qualities add up to a very pleasing overall package. Sure, the Samsung Galaxy A5 commands a heavier price tag than the new 5″ Moto G (2014) but adds what Samsung feels is more than enough flair to justify the asking price.

The Galaxy A5 controls layout in typical fashion with the usual controls in all the usual places. The front is mainly occupied by the 5″ Super AMOLED panel of HD resolution.

Above it Samsung has fitted an earpiece, the proximity and ambient light sensors, and a 5MP front-facing camera.

Under the display sits the usual combo of physical home button and two capacitive buttons for recent apps and back. The home button isn’t fingerprint sensing, though, unlike the one of the Galaxy Alpha.

The volume rocker is located on the left side while the power button is side-mounted on the right. Under it are two card slots – the top one is reserved for the microSD card slot but it also doubles as the second nanoSIM compartment on the Galaxy A5 Duos, giving you dual SIM abilities on expense of the memory expansion option. The second slot holds the main nanoSIM card.

The top acts only as the placeholder for the secondary noise reducing microphone while on the top lies the main microphone, the audio jack and the microUSB port.

The main 13MP camera sits on the back between the single LED flash and the single loudspeaker grille. We would’ve preferred the speaker to be front-facing as now the audio is directed backwards, which isn’t ideal, but that’s certainly not uncommon.

The back panel has a pleasant matte finish which feels great when gliding a finger over it.

The Samsung Galaxy A5 comes loaded with wireless connectivity features. LTE starts with LTE Cat. 4 (up to 150Mpbs down, 50Mbps up), while regular 2G and 3G connectivity is, of course, supported, too.

The Samsung Galaxy A5 also has a dual-SIM version, which unlike the Galaxy A3, doesn’t come with any hardware limitations. Both have LTE and NFC connectivity and an equal amount of RAM. The only compromise you are forced to make is to pick whether you want to use its secondary SIM slot as a microSD slot or as a SIM slot – you can’t have both.

There are regional versions of both smartphones that lack LTE and NFC connectivity though, so make sure you are getting the appropriate model for your needs.

There is also support for Bluetooth 4.0 LE and ANT+, the latter allowing for easier connection to certain wireless sports accessories.

The Galaxy A5 relies on a standard microUSB 2.0 port for charging and wired data connectivity. What we do miss here is a wired TV-out option either via MHL or SlimPort.

The Samsung Galaxy A5 can offer its secondary SIM slot as a microSD slot or as a SIM slot – you can’t have both.