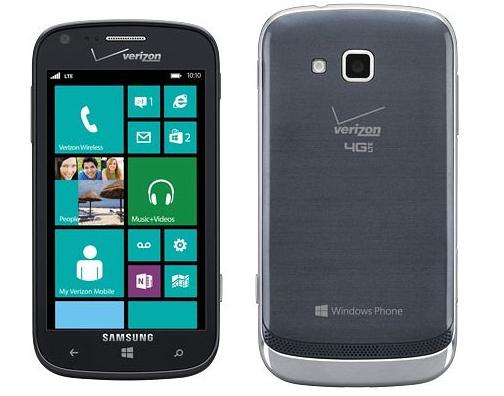 The Samsung Ativ Odyssey for Verizon Wireless is the manufacturer’s only Windows Phone 8 handset on offer in the United States – not exactly an all-out effort by any standard. The Korean giant decided not to bring the Galaxy S III resembling Samsung Ativ S to Microsoft’s vital home market in order to keep all the consumer attention pinned to its successful Android flagship.

Despite looking somewhat similar to its globally available sibling at a first glance, the Samsung Ativ Odyssey is significantly less equipped than the Ativ S. The LTE device is powered by the same 1.5GHz dual-core Qualcomm Snapdragon S4 CPU, but features a smaller display with lesser resolution, inferior camera unit, and less built-in memory.

Here’s the full list of talents which the Samsung Ativ Odyssey has to offer.

In a Windows Phone 8 realm where processing power is relatively equal across the board, the Samsung Ativ Odyssey manages to stand out from among its peers with two major qualities. First, the handset offers unmatched compactness and one-handed ergonomics, thanks to its 4″ display. Also, with a user-replaceable 2100mAh battery, the device offers the biggest battery available on a WP8 smartphone in the United States.

As far as specs go, we were mostly puzzled by seeing the Ativ Odyssey use the well familiar 4″ WVGA PenTile Super AMOLED screen. This particular display unit has been featured in a massive number of Samsung devices but today, three years after its introduction, it doesn’t feel (or look) cutting edge even by today’s WP8 low-tier standards.

So, does the Samsung Ativ Odyssey deserve a spot in the US Windows Phone 8 landscape, currently dominated by Nokia and HTC? Read on to find out! As always, we are going to kick the handset’s review off with an unboxing, followed by a design and build quality inspection.

Editorial: You might notice that this review is shorter than usual and doesn’t include some of our proprietary tests. The reason is it has been prepared and written far away from our home office and test lab. Still, we think we’ve captured the essence of the phone in the same precise, informative and detailed way that’s become our trademark. Enjoy the good read!