The Nokia Lumia 925 is a subtle but meaningful update of what was – literally until a few days ago – the company’s top smartphone offering. While designers and engineers were busy fixing the Lumia 920, the guys next door produced a louder bang with the Lumia 1020.

Still, the Lumia 920 was in many ways the flagship that really showed the company with its best foot forward. And the Lumia 925 is a very welcome facelift, sporting a lighter, thinner aluminum frame instead of the all-polycarbonate bulk of its predecessor.

The screen is of the same size and resolution, except this time around it’s an AMOLED panel, which works great with the mostly black WP8 interface. It’s the AMOLED screen too that takes credit for the fat loss. Other small highlights are the inclusion of an FM radio and some minor software improvements, but those will also be seeded to the Lumia 920 with a software update. 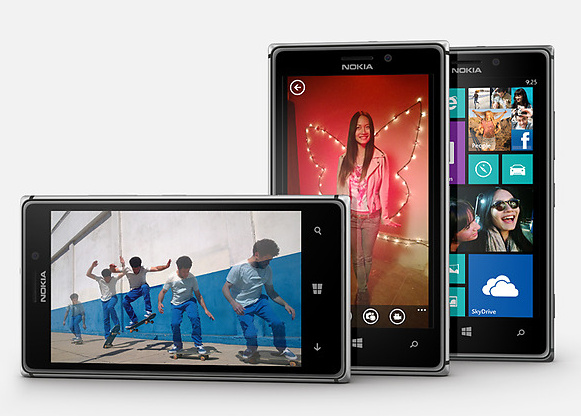 When it comes to the updated chassis, the Lumia 925 refresh can be likened to BMW’s M-Series – they’re very similar to their non-M-powered brethren when it comes to design, but the updated body is a definite improvement over the original. In terms of what goes under the hood though, these are two different schools of thought. Because the 925 is basically the same package as the the Lumia 920.

The Lumia 925 is all about the looks and feel – the updated body is a definite improvement, and there’s a few extra features thrown in to sweeten the pot as well. Although it may be minor, the inclusion of the thinner and, more importantly, lighter frame takes care of two of the disadvantages we listed for the Lumia 920.

The chipset is the same as before and while it’s not a benchmark blaster, but WP devices have consistently demonstrated they don’t need too much horsepower to give a smooth ride through the UI. Of course, heavier apps may tend to load a bit slower, but lags and system freeze should be pretty much out of the question.

In terms of looks, the Nokia Lumia 925 is closer to the Lumia 720 than the 920. It’s a rectangular phone with rounded sides and a tapered back to hide some of the thickness. The sides are made of exposed aluminum, while the back is polycarbonate with a kind of rubberized finish to it. This provides a bit of extra security when holding the phone.

The metal vs. plastic debate has been heating up in Android land, but the Lumia 925 is somewhere in between. It’s not a bad choice as Nokia’s polycarbonate has always been top notch and the aluminum still gives a solid, premium feel.

The aluminum also has another function – it serves as an antenna. The antenna in the grame design became infamous with the iPhone 4, which suffered from the so-called “death grip”. That’s when touching the metal would compromise reception.

Nokia has promised that the Lumia 925 is immune against it and, indeed, we didn’t experience any signal drops. No matter how hard we tried, the phone didn’t suffer any signal loss. Kudos to Nokia for pulling that one off.

The polycarbonate on the back has a soft touch finish and will come in three different colors at launch – White, Grey and Black. This propensity for monochrome is uncharacteristic of the Lumia line, which favors bright colors like Red, Yellow or Blue. It’s durable and not prone to scratches, which is good, because it ultimately means you won’t need to wrap the phone in ugly cases to protect it.

The Lumia 925 is wider than most phones with 4.5″ or so screens – the bezel is pretty thick and the screen has 15:9 aspect ratio, making it wider to begin with. It’s also taller than usual, but at least that leaves enough room around the capacitive keys to prevent accidental touches (which are not uncommon on the Samsung Galaxy S4 and others).

That affects the handling – it’s certainly not a deal-breaker (it’s on par with the Lumia 920), but narrower phones are more comfortable to hold. Pocketability, however, has soared in part due to the reduced thickness but mostly because of the lower weight. 185g is phablet kind of weight, while 139g is virtually the same as the iPhone 4S which many people carry in their pockets without complaint.

We should note that the Nokia Lumia 925 lost some body fat by dropping the wireless charging support of the Lumia 920. You can add that back with a thin back cover that connects to the three pogo pins above the loudspeaker. Nokia has not announced the combined thickness or weight of phone + cover.