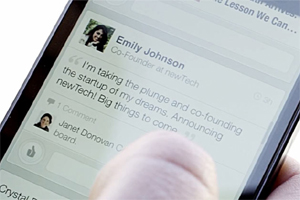 San Francisco: Online professional networking service LinkedIn is dressing up its mobile application to impress people who are increasingly scrolling through content on smartphones. The changes being unveiled Thursday mark LinkedIn’s first major overhaul of its mobile app in 20 months.

Since then, more than 80 million additional accounts have been opened on LinkedIn’s website to push its total beyond 200 million users worldwide.

More of those people are checking LinkedIn on mobile devices as they look for career tips, job leads and interesting information about companies and industries. LinkedIn features plenty of that content, but it hasn’t been easy to find on its mobile app. By making all that easier, LinkedIn is hoping people will come back more often, giving the company more opportunities to sell advertising.

The new design relies on formulas that are supposed to figure out which features and topics are the most appealing to each user and ensure that those services are just one tap away. Finding some content on LinkedIn’s previous app required up to four taps to the frustration of many users who only had a couple minutes of free time, said Joff Redfern, the company’s head of mobile products.

In case LinkedIn’s formulas don’t get their preferences quite right, users will be able to program the new app to highlight specific types of content.

LinkedIn’s new app also will display photos and other graphics more prominently within a stream of updates. The stream will look similar to what people who frequent Facebook see on smartphones and tablet computers.

The new app is being released for devices running Google Inc.’s Android software, as well as for Apple Inc.’s iPhone and iPod Touch. LinkedIn isn’t making any changes to its year-old app for the iPad yet.

The revamped phone app was born out of LinkedIn’s belief that professional networking is growing as more people realize they can advance their careers by using online tools more effectively.

“Historically, people came to us only when they were trying to get a job,” Redfern said. “But now more people are coming to us on a daily basis to be great at what they do.”

Other popular Internet services are getting even more mobile traffic. For instance, Facebook says nearly two-thirds of its 1.06 billion users enter its hangout through a mobile device at least once a month.

Like Facebook already has been doing, LinkedIn for the first time will insert mobile ads within the stream of updates flowing through the redesigned app. The mobile ads are supposed to be tied to LinkedIn’s interpretation of each user’s interests.

Unlike Facebook and many other Internet services, LinkedIn doesn’t rely on advertising as its main moneymaker. Advertising accounts for about one-fourth of LinkedIn’s revenue, with the rest coming from fees that the company charges for access to user data that are particularly helpful for headhunters and companies prowling for talented employees.

LinkedIn’s approach has been highly successful so far. Although the Mountain View, Californiia, company is about one-fifth the size of Facebook in terms of annual revenue and total users, its stock has been the hotter commodity on Wall Street. LinkedIn’s shares have nearly quadrupled since the company went public in May 2011, while Facebook’s stock has sunk by 30 per cent from its initial public offering price 11 months ago.


LinkedIn spruces up mobile app to widen appeal 2013-04-23
admin
Previous: Twitter to show ads based on the content of users tweets
Next: CBI May Probe Google Mapathon Case