Microsoft is continuing to push affordable Lumia handsets into the market and the latest to join the league is the Lumia 430 Dual SIM.

The Redmond giant touts that the Microsoft Lumia 430 Dual SIM is the “most affordable Lumia to-date” and comes at a price of $70 (approximately Rs. 4,400) before taxes and subsidies. The Lumia 430 Dual SIM will begin rolling out in select markets in the Middle East and Africa, Asia-Pacific, Russia, Kazakhstan, and Belarus starting in April, while it will roll out in India towards the end of April. The Lumia 430 Dual SIM comes in Bright Orange and Black colours. 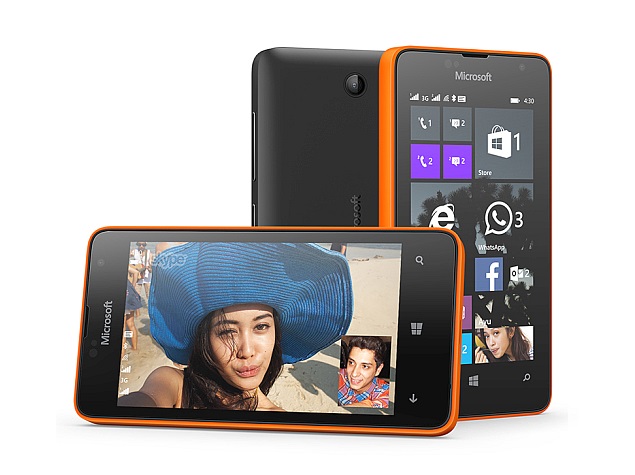 Another highlight of the Lumia 430 Dual SIM is it can be upgraded to Windows 10 when it becomes available later this year.

For specifications, the Microsoft Lumia 430 Dual SIM runs Widows Phone 8.1 with Lumia Denim update. It features a 4-inch WVGA (480×800 pixels) LCD display offering a pixel density of 235ppi. The smartphone is powered by a 1.2GHz dual-core Qualcomm Snapdragon 200 processor coupled with 1GB of RAM. It comes with 8GB of built-in storage expandable further via microSD card (up to 128GB). Much like other Lumia handsets, the Lumia 430 Dual SIM also comes with 30GB of free OneDrive cloud storage. It sports a 2-megapixel fixed-focus rear camera while also housing a 0.3-megapixel front camera. The handset is backed by a 1500mAh replaceable battery, measures 120.5×63.19×10.63mm, and weighs 127.9 grams.

Commenting on the launch, Jo Harlow , Corporate Vice President for Phones at Microsoft said, “People around the world have responded enthusiastically to our affordable Lumia range. We continue to invest in this segment to ensure that as many people as possible can enjoy signature Microsoft experiences, regardless of budget. The Lumia 430 Dual SIM continues our commitment to combining the right hardware, software, services and apps with the right price to give people a smartphone they can afford and be proud to use.”