After reviewing two really slim smartphones, the Gionee Elife S5.1 (Review | Pictures) and the Oppo R5 (Review | Pictures), we finally got a chance to review the Vivo X5Max – the latest smartphone to claim the title of slimmest in the world. The battery life and heating problems we faced with the Elife S5.1 and R5 lead us to believe that in a bid to make slim smartphones companies are making certain sacrifices. Can the Vivo X5Max change our perception? We find out. 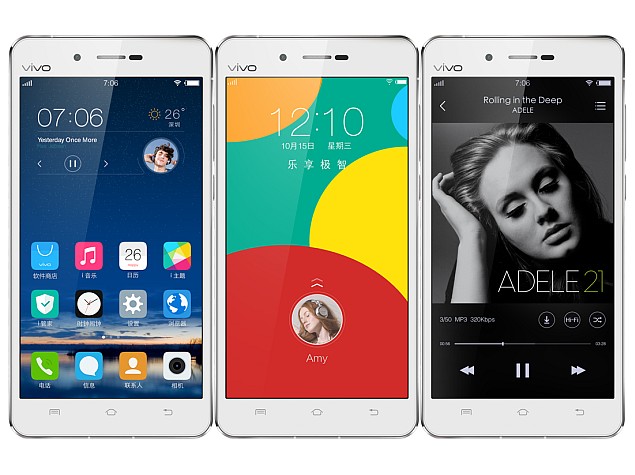 Look and feel
One look at the X5Max and we noticed similarities in design with the Oppo R5. Both phones are available in only a single white/grey colour scheme. They are made from a mix of metal and plastic, and have similar chamfered edges. The X5Max is slightly wider and taller than the R5 at 153.9 x 78mm. Additionally, the 156g weight makes it light enough to hold comfortably. Thanks to the use of metal in the construction, including the frame, the phone feels sturdy.

The X5Max’s USP is its 4.75mm thickness, officially making it the slimmest smartphone in the world. However, we couldn’t really feel much of a difference in slimness between the X5Max, Gionee Elife S5.1 and Oppo R5. All the talk about slimnness feels like more like a marketing tactic than a feature that has any sort of practical benefit.

The power button and volume rocker are on the right. Also present on the right is a tray that can hold two SIM cards, one Micro and the other Nano. Interestingly, the slot that accepts the Nano-SIM card also doubles up as a microSD card slot. This of course means that you can’t use two SIMs if you want to add storage space. This is a disappointing workaround, and will only be practical if users are alright with swapping cards. The Micro-USB port lies on the bottom whereas the 3.5mm audio jack sits on top.

The phone has three capacitive buttons below the screen for navigating through the operating system. Above the display, Vivo has placed the earpiece, front facing camera, a cutout for ambient light and proximity sensors, and the notification LED. A large speaker grille is at the bottom on the rear. Also on the rear is the primary camera which juts out a bit (this seems like a normal thing now if you are making a slim smartphone) with the flash module by its side.

Specifications and software
Vivo packs the X5Max with Qualcomm’s latest mid-range octa-core processor, the Snapdragon 615. This SoC fuses four 1.7 GHz Cortex-A53 cores and four 1.0 GHz Cortex-A53 cores, with an Adreno 405 GPU for graphics. There is also 2GB of RAM which should be sufficient for most practical purposes. The phone has 16GB of internal storage which can be expanded by up to 128GB using a microSD card. 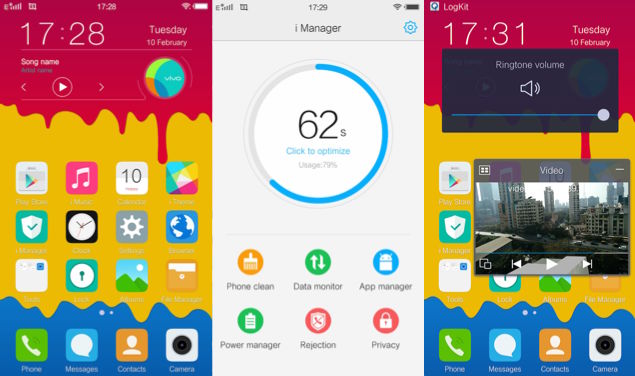 The Vivo X5Max has a 13-megapixel primary shooter with flash. There is a 5-megapixel front-facing camera for selfies and video calls. Apart from connecting to 3G networks, the Vivo X5Max can also connect to Indian 4G networks on the 2300MHz band. With respect to other connectivity options, it has support for Bluetooth 4.0, GPS, and Wi-Fi a/b/g/n. Despite the space constraints, Vivo has fitted the X5Max with a 2,000mAh battery.

A 5.5-inch Super AMOLED screen adorns the front of the phone and has a resolution of 1080×1920. As is the case with AMOLED screens, the colours are really vibrant. Thanks to the fairly high pixel density of 401ppi, text and images are super crisp. The viewing angles were not too bad but our only grouse with the otherwise good display was that the brightness level wasn’t as high as other phones, which drastically affected sunlight legibility.

Vivo’s FunTouch OS skin is wrapped around Android 4.4.4 KitKat. The company has promised an update to Android Lollipop in the near future. FunTouch OS, much like the skins used on other Chinese smartphones, does not have an app drawer. Unlocking the phone leads to the homepage lined with tons of icons. The lockscreen has a large circular icon with a customisable avatar that can be swiped upwards to enter the homescreen. There is a digital clock on top under which you can show a custom signature. 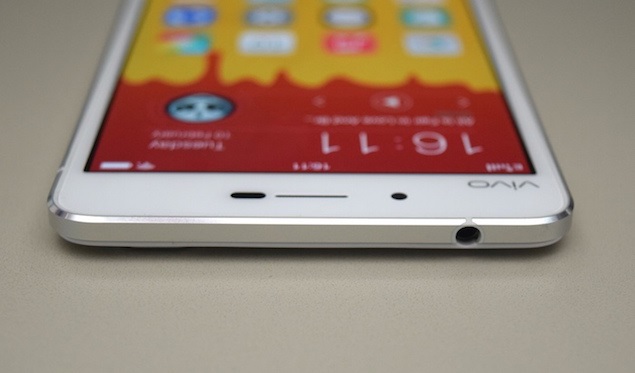 The skin has a quite a few other software-level tweaks. Unlike most Android phones that have quick settings options in the notifications shade, FunTouch OS brings up a separate panel when you swipe upwards from the bottom of the screen. This bottom shade has a row of icons representing open apps, which you can close with a neat animation by swiping the icons upwards. Below that is a brightness slider. All the quick settings are available in an endless scroll on the lowest row.

Vivo also provides an option for a multitasking window which can open four preset apps like – notes, video, music and inbox. Also available are a ton of optional gestures which allow the user to perform functions from the lock screen itself, such as drawing an ‘e’ to open the browser or sliding downwards to take a photo. All these gestures work really well.

By giving its apps names such as i Music, i Theme and i Manager, we think Vivo is trying to escape a lawsuit by not directly using ‘i’ as a prefix. VivoCloud can be used to save your contacts, text messages and web bookmarks directly to the cloud. Vivo also bundles the messaging clients WhatsApp and WeChat with the phone. Other apps include Facebook and WPS Office. Only the third-party apps can be deleted.

Camera
Vivo’s default camera app is similar to Apple’s fuss free app. It doesn’t have any manual controls and has only a few shooting modes in the form of Face Beauty, HDR, Panorama, Night, Children, PPT, Bokeh, Sports and Watermark. None of the modes, including HDR, give good output and as a result we stuck to regular shooting mode for best results. 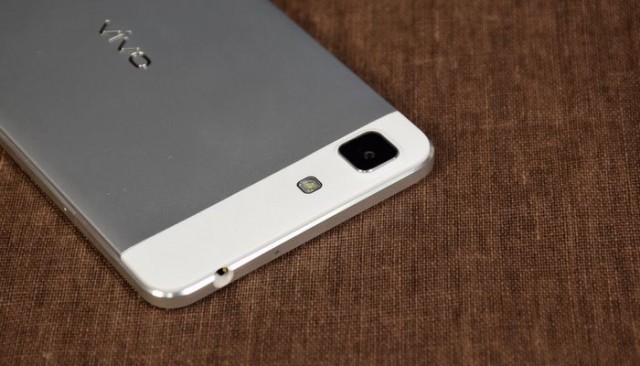 The primary camera can capture some decent details and naturally warm colours, although in our test shots we noticed that images had a fair bit of distortion around the edges and some chromatic aberration as well. In low light the camera struggled to capture images without noise. The 1080p video we shot was too dark even in bright sunlight, and a lot of details were missing. The 5-megapixel front camera surprised us with really good colour fidelity and details. This camera won’t disappoint you unless you want a really wide-angle lens.

Performance
The phone handles FunTouch OS’s umpteen animations with ease. In retrospect, we actually appreciate Vivo for making a skin that is loaded with animations yet light. We played a video in windowed mode, read a couple of pages of text and fired up a game, and not once did we face any slowdown or stutter. You should be able to play even graphically intensive games without any hassle. Most importantly, the heating issues that were persistent with other slim smartphones we reviewed are not present in the Vivo X5Max which is really great. 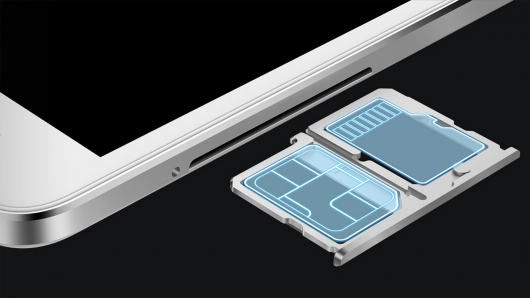 The benchmark numbers weren’t too bad either and were close to what we achieved with the Oppo R5. In the 3DMark Ice Storm and GFXbench graphics benchmark tests we managed to achieve scores of 9,277 and 15fps respectively. AnTuTu and Quadrant returned scores of 19,040 and 16,152.

However, we were really surprised to see that our heavily encoded 40mbps 1080p test video skipped frames during playback. We tried multiple video players form the Play Store and yet the problem persisted. The speakers can put out loud audio but at the highest volume the sound crackles a bit. The bundled earphones are really good and should be more than sufficient. The sound quality in calls is good but we noticed that the phone dropped calls quite a bit in areas where some other smartphones managed to hold on to signal without any problem, but this could have been due to network congestion on that particular day. In our rigorous battery test the phone lasted a good 8 hours, 4 minutes, which is better than the results we got with the Elife S5.1 and the R5. You should easily get at least a day’s worth of use from the X5Max before it dies on you. 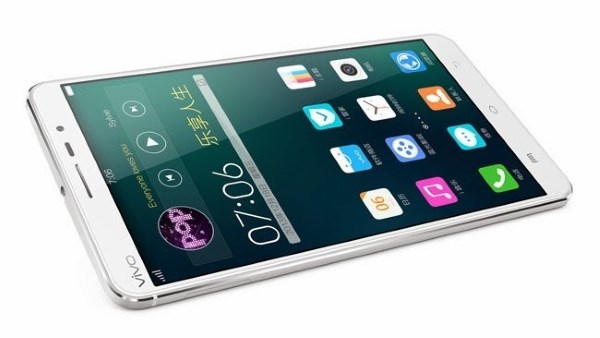 Verdict
We are actually quite impressed with the the Vivo X5Max. Despite being slimmer than its counterparts, it actually has better battery life and doesn’t heat up either. However, the primary camera is not the best of the lot. Another major downer for the Vivo X5Max is its asking price of Rs. 32,980. This is too high for a phone that competes directly with behemoths like the Motorola Moto X (Gen 2) and the Lenovo Vibe Z2 Pro .

Taking all points into consideration, we can’t deny that the Vivo X5Max is overall the best ultra-slim smartphone at the moment. The fact that it is the slimmest of all the options available is an added advantage.