Sony just dropped a real bomb on the phablet market – a 6.4″ monster that threatens to flatten the competition. The Sony Xperia Z Ultra the first officially announced device to be powered by Snapdragon 800 and it’s also the thinnest device with a 1080p screen.The list of tricks the Sony Xperia Z Ultra knows is almost too long to fit on even its sizable screen. Seriously, this thing is both massive and packed to the rafters with cool features. It slots between the Xperia Z and Xperia Tablet Z, using the same sleek OmbiBalance design and philosophy – “glass is good, thin is even better”.

The Sony Xperia Z Ultra profile measures just 6.5mm, the slimmest 1080p device and close to slimmest overall. We were quite impressed with the Tablet Z and this undercuts it by a fraction. Unlike the Xperia Tablet Z, however, this uses the latest chipset and Android available – Snapdragon 800 and Android 4.2 respectively. 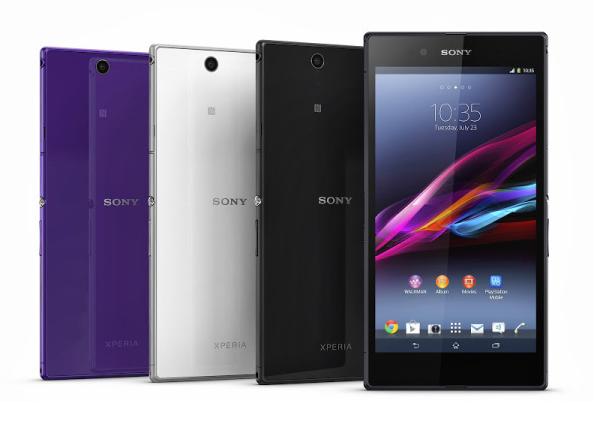 This is a no-mercy pre-emptive strike against the Samsung Galaxy Note III and all other high-end phablets that might crop up. So far we’ve only heard that this or that device will use a Snapdragon 800 chipset, but this one is the first to really go for it. And the attractive design and thin body are bound to win many proponents – they did for the Xperia Z and Tablet Z.

Same goes for the water resistant certification – IP58 means it can go deeper than 1m of water, unlike the sissy Xperia Z and Samsung Galaxy S4 Active.

The screen has 1080p resolution and despite the big increase in diagonal it still has 344ppi pixel density, enough to qualify it for a Retina display label. It’s a Triluminos display with OptiContrast and X-Reality, too, to prove that Sony is throwing the kitchen sink at this one. If it’s as good as the one on the Xperia Tablet Z, we’d be stocked (no offence to the Xperia Z phone, but we like good viewing angles).

The slim body did come at a price though, the battery has only 3,000mAh capacity. That’s not a lot to go around for a quad-core processor clocked at the insane 2.2GHz (which might be very power-efficient, we don’t know yet) and a 6.4″ 1080p display.

The Sony Xperia Z Ultra is a fairly large phablet – it’s about halfway between a Note II and a Nexus 7. It’s a matter of perspective really. One thing it is not is a phone – it has full telephony functionality (HD Voice even), but it’s not a comfortable device to hold up to your ear for long voice calls. Luckily there are plenty of hands-free sets that you can use for that, include the just launched Sony SBH52.

And the Sony Xperia Z Ultra really excels for the remaining 95% of the time – browsing, watching videos, gaming, messaging and everything else.

We’re glad to see Sony’s OmniBalance design again. We loved it on the Xperia Z and the Xperia Tablet Z and we love it here. The sizable Z Ultra phablet has even improved on the already great looking tablet with a brushed aluminum frame running along its sides to give it stability and tempered glass on the back and on the front.

Unfortunately, you have to wipe the front and back quite often to keep the Sony Xperia Z Ultra looking good as all that glass is a real fingerprint magnet.

The 6.5mm of thickness is quite stunning. The angular sides don’t make the Xperia Z Ultra the most comfortable device to hold in one hand, but for two handed operation the slim chassis feels really impressive. It’s not too heavy either – 212g is certainly a burden you will feel in your pocket, but it’s barely any heavier than the Samsung Galaxy Mega 6.3 and that is all plastic, no metal, no glass.

It’s not that hard to slip the Xperia Z Ultra into your pocket (well, certainly not every pocket) but we’re not sure how we’ll feel after a whole day.

Anyway, it’s quite worth it – the 6.4″ display has 1080p resolution and 344ppi pixel density, meaning it’s as sharp as last year’s flagships and the iPhone 5, a bit more even. And we’re pleased to report that the screen has better viewing angles than the Xperia Z screen. There’s still some color shift and contrast degradation, but it’s nowhere near as bad.

It’s a Triluminos display, too, which explains the beautiful colors. Sony says the Xperia Z Ultra display has wider color gamut than regular LCDs and it’s easy to see that colors look better than they did on the Xperia Z.

There’s X-Reality image processor (the BRAVIA engine successor), which will intelligently enhance contrast, add saturation, reduce noise and the Super Resolution will make sure very video makes full use of the 1080p resolution of the screen.

The OptiContrast design means the display is laminated to the glass to reduce optical flare, but unfortunately it’s much too dark in the showroom to tell the difference.

Sony is starting to corner the market on water resistant devices – the Sony Xperia Z Ultra has an IP58 certification. That’s one more than IP57 of the Sony Xperia Z and Samsung Galaxy S4 Active but it’s very important – IP57 limits the maximum depth to 1m and the submersion time to 30 minutes, but IP58 means the Xperia Z Ultra can go deeper and stay for longer.

How deeper and how much longer wasn’t specified, but underwater photography in the swimming pool is an option with the phablet. Sadly, the lack of a camera flash means low-light shooting isn’t its element.

A good thing we noticed is that Sony managed to cut down on the number of flaps – the 3.5mm audio jack is now left exposed. That leaves only two flaps – one for the microUSB port and one for the microSIM and microSD card slots. The two are on the opposing sides of the phablet. The Sony Xperia Z Ultra comes with 16GB of built-in storage (11GB of which is available to the user).

Moving to the back, there’s a camera with an Exmor-RS sensor that shoots 8MP stills and 1080p videos and you can enable HDR mode for both. There’s no LED flash here though.

It packs four Krait 400 CPU cores clocked at 2.2GHz, which is doubly impressive considering Krait 400 beats Krait 300 at identical clock speed. The new Adreno 330 is also expected to be a beast, dwarfing even the ubiquitous 320 found in current flagships.

All in all, the Sony Xperia Z Ultra will be ready to tackle everything on the market when it comes out in Q3 (even if LG and Samsung manage to put out their Snapdragon 800 devices out by then).

Sony also showcased the new Magnetic Charging Dock, the DK30. It features a magnet that pulls the phone to the correct position, so you can plug the Z Ultra in it without even looking. The dock also keeps the phablet at a comfortable viewing angle if you need to use it while it’s charging.