The Sony Xperia E and Xperia E dualare nearly identical, with the number of SIM slots the only notable hardware difference. It boils down to what makes more sense to you as a user – dual-SIM support or the more recent Android 4.1.1 Jelly Bean.

When talking entry-level smartphones, a single-SIM package usually has to try harder to make itself noticed. Dual-SIM versions are usually regarded as niche devices but they have the benefit of a clearly defined target audience. There’s a lot of competition in Sony Xperia E’s price bracket, and not just droids either. Yet, Jelly Bean right out of the box gives it a good enough start. Let’s take a closer look at what else it has to offer: 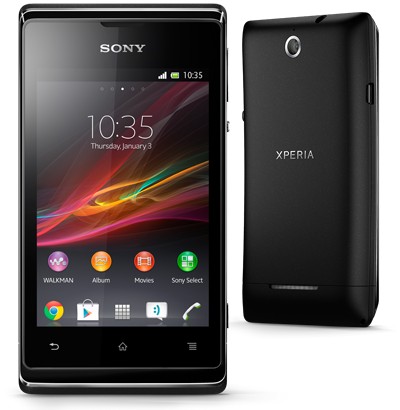 The Sony Xperia E is yet another Qualcomm-powered 3.5-incher for Sony in the entry level market. It’s got the upper hand over the likes of the Tipo and Miro (clocked at 800MHz), and probably even the Xperia J which is has the exact same 1GHz chipset but a bigger and more pixel-rich FWVGA screen. Bottom line, no record-breaking speed is to be expected here but the Xperia E will most likely get the job done for first-time smartphone users.

The Sony Xperia E uses the design theme of the previous generation of Sony smartphones, the subtle inward curve of the battery cover reminiscent of the Xperia J and, more flatteringly, the ex-flagship Xperia T. The curvature is a lot less prominent of course in the Xperia E, which is the shortest and chubbiest phone of the three.

Unlike most of the 2012 Xperia smartphones that came with flat matt-plastic battery covers, the Xperia E employs a textured rubberized finish that’s almost fingerprint-proof.

What will get smudgy all the time is the screen glass and the glossy black bezel. Keeping the front clean is a tough job too – a microfiber cloth will do the job, but it won’t be long before it’s required once again.

The Xperia E has no fancy finish, but looks better built than most in its price range. The plastic used feels both adequately sturdy and nice to the touch. The Xperia E’s rubery back provides excellent grip and the smartphone handles really comfortably.