It is the company’s first smartphone powered by a MediaTek chipset. Sony has so far always opted for either Snapdragons or (when the company still existed) ST Ericsson but, with China being the primary target market, it had little choice really. The latest MediaTek chips support both dual-SIM and quad-core processors, and they are light on the wallet too.

Affordability is, of course, an important reason, considering Asian markets are teeming with sub-$200 quad-core droids and competition is fierce. The likes of Lenovo, Micromax, Xolo, and many more, are ready to offer a big enough screen and decent feature set on a bargain.

What this means is the Sony Xperia C should be preparing for a full-scale war. Let’s check the ammo: 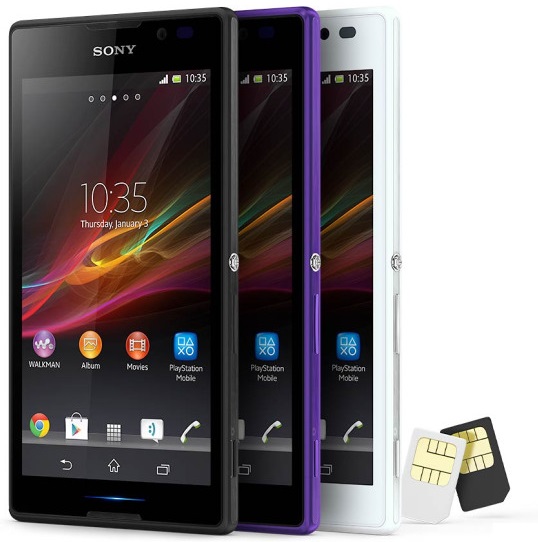 The Xperia C obviously didn’t remain confined within Asian boundaries as various European retailers are already shipping it at very attractive prices. It sure isn’t the fastest or the most feature-rich of phones, but it sounds like a great bang for your hard-earned buck.

The Xperia C’s entire front is occupied by the massive 5″ TFT screen with no hardware controls whatsoever, and bezels that could’ve been slimmer. Even with those, the Xperia C is still the same size as the top-of-the-line Xperia Z1.

The breathing LED is discretely hidden beneath the glass just below the screen. It illuminates a tiny slit that grows thinner at the edges and looks quite pleasant.

The Xperia C is a well-built phone. The removable rear panel doesn’t bend or squeak, and the handset has an almost unibody look and feel.

The phone is big though and those bezels don’t help either. The same size as the Xperia Z1, and a few grams lighter, it’s slim enough to easily slip into pockets but its presence will always be felt. The phone is reasonably comfortable to handle.

Sony put a 2390mAh battery inside the Xperia C. We ran the handset through our battery routine, making sure to have two SIM cards in. It scored 68 hours, which means you’ll only need to charge the smartphone every 3 days if you use it for an hour each of talk-time, web browsing and playing video per day. Quite an impressive result indeed and possible because of the low-consumption Cortex-A7 processor cores and the fact that the screen brightness is actually at less than a quarter of its maximum level when the slider is set to 50%. 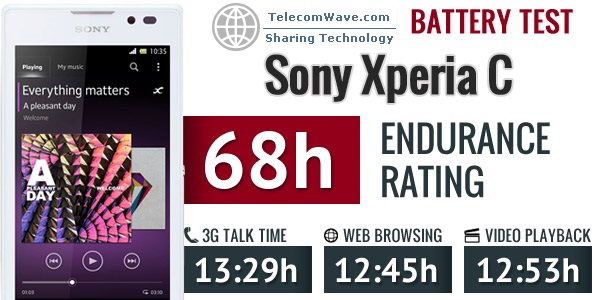 Android 4.2.2 in charge of operations

The Sony Xperia C comes with Android 4.2.2 out of the box and Sony’s proprietary Xperia launcher on top. There is no official info on if and when the Xperia C will be getting a newer Android version though.

Here is a demo video of the Sony Xperia C to get you started.

The Xperia C gives you the option to add or remove homescreen panes (you start with five) and set any of them as default. You can’t have more than seven panes at any given time though, nor can you change the order they’re in.

The background for the virtual on-screen buttons is black when you are running an app and completely transparent when you are browsing homescreen panes and menus.

Google Now is ready to serve you

Google Now integrates with your Google account and it can access your daily routine, internet searches, email, etc. and give you information relevant to you.

It provides traffic information to your work or home, knows the scores of sports teams you follow and gives you the weather forecast for your location.

The latest version of Google Now (November 2013) will allow you to have short dialogues with the app AI when you are conducting searches. In these dialogues, Google Now should be able to understand when you referring to your search term by an indirect pronoun instead of using its full name. It will also answer back when there are several options for action.

Another perk of the new version is that you can now activate the Google Now voice commands handsfree by simply starting with a “Ok, Google” instead of pressing the Mic button. This however, should only work in US locales.

The Sony Xperia C has a 5″ LCD display of qHD resolution (540 x 960) for a decent, if hardly spectacular, 220ppi sharpness. The Samsung Galaxy Grand stretches its WVGA resolution far thinner and while there are some 720p options in the class, qHD is not a disadvantage here. There is no special anti-scratch surface over the screen and no special coating either, so the screen is very prone to fingerprints and not easy to clean.

As usually we did our battery test on 50% of the dedicated brightness slider and you should have that in mind when you are looking at its scores.

The front display glass is quite reflective too, making the screen hard to read in direct sunlight.