The Nokia Lumia 1520 didn’t just tip-toe in, looking over its shoulder. Armed with a PureView camera, a 1080p display and a quad-core Snapdragon 800, the Finnish giant entered with a bang!

The latest GDR3 version of Windows Phone finally has support for quad-core Krait processors and Full HD displays. There’s an attempt too, to make better use of the size and resolution by adding an extra column of contents across the interface. It was about time Microsoft brought the platform back in the hardware race and we are delighted to finally meet the first Windows Phone to aim for the pole position. 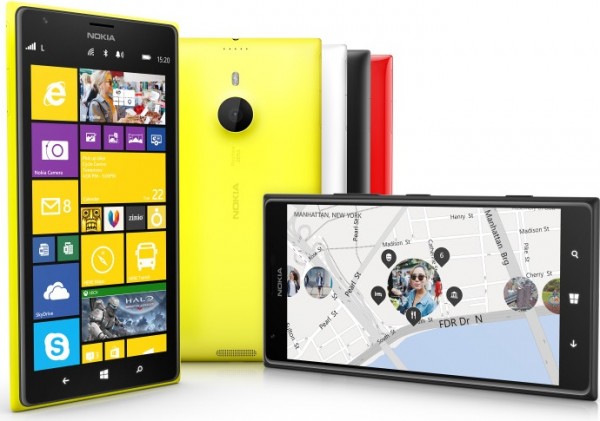 At first glance the Lumia 1520 looks like a magnified Lumia 1020 – it has the same design and build, only without the camera hump. The trademark unibody is the right bit more impressive at that size, while the PureView camera has lost some of its sensor area and half of its pixels, but hopefully kept the amazing image quality.

Nokia’s Lumia Black update isn’t bringing as many new features as Amber, while the GDR3 version mostly makes sure the OS would happily accommodate the new chipset and screen resolution. Users will perhaps have to wait for the 8.1 update for a notification center (hopefully) and a file manager (not too likely) among other things.

Yup, the Lumia 1520 sounds just like what the doctor ordered for the ailing Nokia cellphone business. It makes us sad that they’ve decided to scrap any future effort altogether, but that doesn’t mean it won’t be closing the show with a bang. We may be well into their farewell season, but the finale is not close. It’s too early to write Nokia off just yet – what we have ahead seems like the climax of its work.

The Lumia design has been pretty much set in stone but not without some variations. The Nokia Lumia 1520 is actually very similar to the Lumia 925. The difference to the Lumia 1020, for instance, is that the top and bottom edges are rounded rather than flat. Other than that, the rectangular look and beveled sides are an unmistakable trait of the Lumia line since its inception.

Phablets are pushing the limits of what can be considered pocketable and comfortable for one-handed use. That said, the Lumia 1520 is not the biggest around – as we said, the HTC One Max is a tad taller and heavier, while the Samsung Galaxy Mega 6.3 is tangibly bigger.The phablet maintains the capacitive Back, Home and Search buttons just like other phablets (One Max, Galaxy Note 3 and Galaxy Mega 6.3). Above the screen is a 1.2MP/720p front-facing camera along with an array of sensors. The front of the phablet is almost entirely coated with Gorilla Glass 2, which covers the screen, the capacitive keys and front camera.

The battery in the Lumia 1520 is sealed, but it has the reasonably big capacity of 3,400mAh. The phablet comes with built-in wireless charging, a feature that was missing in the 1020. To make use of it however, you would have to buy separately a Qi wireless charger – these days those come in many shapes and sizes.

The massive battery, light-weight Windows Phone OS and power-efficient display were made to count in video-playback and web browsing test. They surely helped the Lumia 1520 achieve an amazing score despite the huge estate to light up. Talk time and the overall stand-by endurance are great too thus the 107h top-notch rating is no surprising. 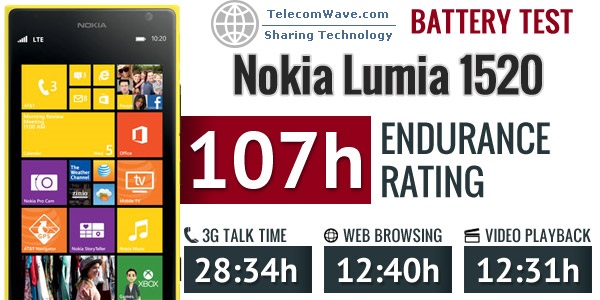 Anyway, with an overall rating of 107 hours, the Lumia 1520 is well ahead of the other phablets we’ve tested so far. What this number means is that the Lumia 1520 should manage four and a half days on a single charge if used for one hour each of calls, web browsing and video playback daily.

The Nokia Lumia 1520 has a 6″ IPS LCD screen of 1080p resolution, the pixel density works out to 367ppi. The LCD incorporates Nokia’s ClearBlack tech – a set of polarizing filters, which minimize glare. Plus, Gorilla Glass 2 on top for protection.

The capacitive touch sensor on the display features the supersensitive touch technology that allows it to detect fingers even through winter gloves.

The 1520 comes with the Lumia Color Profile option in the settings, which gives you two sliders to play with – one for color temperature (which spans the cool, neutral and warm range) and color saturation (natural to vivid).

The Nokia Glance screen keeps the clock and notification counters visible even after you lock the screen. This could be set to appear only for a little while after you lock the screen, intermittently on and off and always on. There’s a separate always on setting for when the device is charging. A Night mode allows you to pick a different color for the Glance screen info – Red, Green or Blue – if the default White setting is too bright for your sleepy eyes.One new option in GDR3 is the screen rotation lock. That’s an important feature for a phablet, but unfortunately it’s only accessible from the Settings menu, which means you have to leave the app you are using to change it, there are no quickly accessible toggles here (this is a common problem for any settings in Windows Phone).

The ClearBlack tech does help minimize reflectivity. The relatively low brightness however hurt the outdoor performance.