With so many flagship “plus ones” out there, it’s refreshing to see something truly revolutionary. The LG G Flex is curved like a Beckham free kick and has a flexible screen and battery, along with a unique self-healing coating on the back.

With so many flagship “plus ones” out there, it’s refreshing to see something truly revolutionary. The LG G Flex is curved like a Beckham free kick and has a flexible screen and battery, along with a unique self-healing coating on the back.

The LG G Flex is curved top to bottom and, as the name suggests, it can flex. It’s not bendable like rubber, you have to really put some muscle to it. It’s quite impressive all the same, as nothing about phones is flexible, not the screen glass, not the screen itself, nor the motherboard or battery. Oh well, they didn’t use to be. 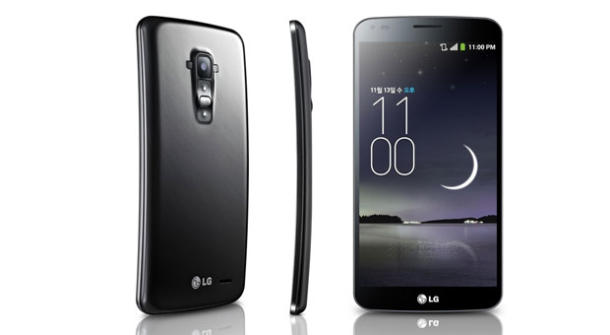 LG leaned on its component manufacturing skills and created a Plastic OLED (POLED) screen that’s flexible (more so than the G Flex itself). The next step is a curved, flexible Lithium Polymer battery (a world first). Despite its odd shape and 8.7mm thickness of the phone, the battery has a respectable 3,500mAh capacity.

The screen measures the massive 6″, but the curve of the device helps the ergonomics. While it impresses with size and flexibility, the screen has only 720p resolution (245ppi). Here’s hoping that the new technology makes up for the lacking density.

While flexible screens and batteries might become more popular with wearable devices (say a smartwatch that wraps around your wrist), the next trick might become standard for all sorts of devices – the coating on the back can heal itself if scratched. This will put an end to all the silly cases and protectors that just make phones thick and ugly.

Beyond the breaking news, the LG G Flex is just the phablet version of the LG G2 with a Snapdragon 800 chipset, 13MP camera (no OIS though), Optimus UI gestures and updated multitasking (with a split-screen option). It even has the trademark hardware controls on the back. The Optimus G Pro is getting a little old and small and the LG Vu 3 is a niche product with its 4:3 screen, so another phablet is a welcome addition to LG’s fleet.

The LG G Flex name will outlive the device itself – years from now we’ll be covering flexible devices or ones with self-healing finish and we’ll add “like the LG G Flex pioneered back in 2013″. But we’re not there yet, for now you can read more about the Flex’s design and build on the next page.

The basic design of the LG G Flex is that of the LG G2, again except for the signature curve. It’s larger than the G2, but the curve improves landscape hold and makes it very comfortable to actually use as a phone – something phablets are not particularly good at. We’re not sure about pocketability though – at least the flexible screen and body make it less vulnerable perhaps if you sit with the phone in your back pocket. Not that we tried.

The front has fairly thin bezels around the large 6″ screen and is very clean with just the earpiece and the LG logo below the display. LG has long settled for on-screen buttons, though for some reason the company uses the old Back, Home, Menu arrangement (there are options to customize this, we’ll get back to this in the software section).

Above the screen is the 2.1MP/1080p front-facing camera, the RGB notification light and the ambient light and proximity sensors.

The back deserves attention for its trademark design of having the volume rocker and power key just below the camera lens, but also for its special coating. It’s a unique coating that heals itself if scratched. This means there’s no need for a protective cover, the G Flex’s back will stay unscathed even without one. In terms of looks, the back glossy with a brushed look, not unlike the LG G2.

There’s an LED that illuminates the power key (blue light only), which acts as a notification light just like the RGB light on the front. LG’s software allows you to enable which apps can use the LED separately for the front and back.

Symmetrically around the camera/volume rocker/power key center line are two small squares, one of which is the LED flash and the other is the IR blaster. This is an unusual place to put the IR blaster, but it’s actually better than putting it on top (which is a throwback to remote controls going decades back). With this design you can hold the device as a phablet rather than a remote when you control your equipment.

Going back to the camera, it’s a 13MP shooter with f/2.4 aperture, which can record 1080p video at up to 60fps. Unlike the LG G2 camera, however, this one lacks optical image stabilization (OIS).

The back of the LG G Flex also features the loudspeaker.

The bottom of the phablet houses a microUSB 2.0 port with SlimPort functionality, meaning it doubles as a TV-Out and USB Host with the proper adaptors. The audio jack is at the bottom, just like on the G2. Also here is the mouthpiece, the secondary microphone is on the top side of the device.

Under the back cover is a one of a kind flexible battery. It’s a curved Li-Po unit with the massive 3,500mAh and it is, of course, non-removable.

True to its name, the LG G Flex can indeed be flexed but it takes effort. You can put it face down on a flat table and push down until it’s straight and you won’t damage the phone. There’s no practical use for this other than to impress your friends.

The curve improves ergonomics – your fingers move in arcs rather than a straight line – and the way the device can slip in and out of pants pockets. Portability in coat pockets and purses is actually hurt a bit by the curve as the phablet tends to take up more space than a flat, 8.7mm thick phablet would. And while you can slip it in your pants pocket, we suspect most 6″ phablets spend most of their time in coats, purses or backpacks.