“Mini” is the hot keyword for phones – a natural response to the pocket-busting 5″ inch trend of this flagship generation. With the same premium aluminum unibody, the UltraPixel camera and BoomSound speakers, the HTC One mini can proudly bear its father’s name.

The screen has come down from 4.7″ to 4.3″ and the height and width of the device have shrunk accordingly. Combined with the lower weight, the One mini feels much smaller than the One, maybe even enough to seduce some iPhone users who have had it with the small 4″ screen. The screen resolution of the One mini is 720p, which still helps it to 342ppi density (better than Retina).

A smaller phone means less space for components. The first piece to feel the effect is the battery which has lost 500 mAh of its capacity and is down to 1,800mAh. HTC also went with a Snapdragon 400 chipset, which offers a dual-core Krait 300 CPU downclocked to 1.4GHz (it’s typically at 1.7GHz) and an Adreno 305 GPU. The RAM has also got cut down to 1GB, which would have any multi-tasker raise an eye-brow. 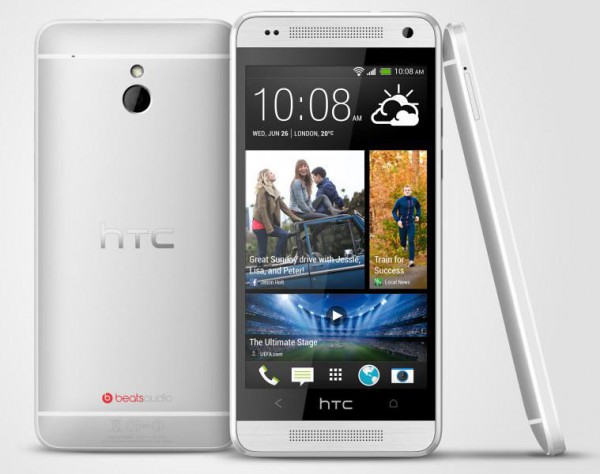 There are a few other pieces missing, here’s the rundown of both the good and the bad.

We understand the chipset choice (though the Samsung Galaxy S4 mini runs the CPU at 1.7GHz). We even understand dropping the Optical Image Stabilization, as even the big HTC Butterfly S doesn’t have it. The company also dropped the NFC and MHL connectivity along with the IR blaster. The non-expandable 16GB of storage makes us wish HTC would offer a 32GB version, even if it’s just to know we have options.

Individually, those are understandable choices, but the Galaxy S4 mini has expandable storage, NFC and IR. Do all the dropped features mean the One mini is really just a fancier midrange phone rather than the compact high-end phone we wanted?

We won’t lie, the aluminum unibody of the HTC One mini is great – it screams “premium” more than the big Galaxy S4, let alone its mini version. And the stereo BoomSound speakers on the front deliver an excellent audio experience, coupled with high-quality audio hardware for the 3.5mm audio jack and Beats audio tuning.

Throw in an UltraPixel camera sensor and the latest Android 4.2.2 with Sense 5 (on par with the just updated regular One) and the feeling that HTC shortchanged the One mini almost subsides.

Unboxing the One mini

The HTC One mini came with the exact same accessories as the HTC One – a compact charger with a detachable microUSB cable, a SIM ejector tool and a one-piece headset with spare tips. The headset is an in-ear design and has cool red accents and flat, tangle-resistant cables.

The HTC One mini is little else, but a downscaled One on the outside – premium aluminum, with the solid feel of a unibody phone all whipped into an attractive design. While the 5″ Butterfly S went with polycarbonate (perhaps due to weight considerations), the HTC One mini should earn as much praise for its design as the regular One did.

The mini also differs from the One in the polycarbonate strip that runs along the sides of the phone. The regular One has it too, but the one on the mini is thicker, covering the entire sides. We think this is an advantage – plastic can take a knock, while aluminum is more brittle (it dents and its paint peels off more easily when hit). We wish HTC had used the same matte plastic as on the One, this one is glossy and doesn’t look quite as good.Cutting down “only” 5mm from the height and width of the HTC One to make the mini might not sound like much, but that’s because it’s difficult to picture. In reality, the One mini feels noticeably more compact than its bigger siblings. It’s roughly the size of last year’s HTC One S, which is impressive as you are getting a pair of stereo speakers at the front.

The screen is gorgeous – with 720p resolution it’s not quite as sharp as the 1080p screen on the One, but at this size, spotting the difference takes some effort. It has great viewing angles and great colors too. Speaking of colors, the screen on our One mini has a warmer white balance than the screen on our HTC One.

The HTC One mini screen is very similar to that of the regular HTC One. The brightness is very high, higher than even the big One, let alone AMOLED screens. The contrast is amazing, making for one of the better viewing experiences on a smartphone.

The screen is fairly reflective though, which hurts its sunlight legibility. It’s this reflectivity that brings down the sunlight lebibility noticably below the level set by the HTC One. It’s not by much, but it’s enough.

The Galaxy S4 mini screen brightness is not that high, but the lower reflectivity makes its display much easier to read out in the sun.