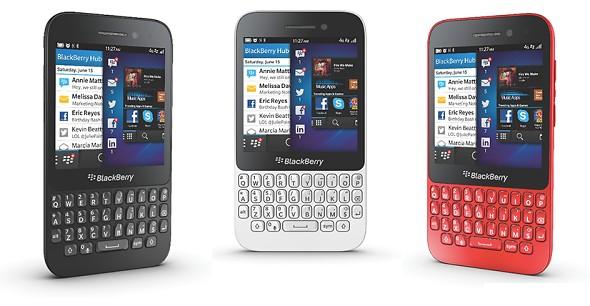 Smartphone makers believe in trickle-down economics. They build their portfolios top to bottom, looking to get as much bang out of the flagship as they can and, after the hype around it has settled, they bring out the more affordable packages to keep the cash rolling in. The big question – always – is how much of the flagship specs will trickle down the ranks.

Having delivered the latest BlackBerry 10 OS in a classic messenger form factor, a midrange package combining touchscreen with the iconic hardware keyboard was next on the Canadians’ to-do list. The Q10 came at a price not a lot of people can afford, so the Q5 promises to deliver the same experience without sweeping the fluff out of your pocket.

At first glance, the Q5 has all the important checkboxes ticked. You get a dual-core Krait chipset, a 3.1″ display of the same 720 x 720 pixel resolution and a four-row QWERTY keyboard for that serious texting and emailing.

The screen is no longer AMOLED, the camera has been downgraded from 8MP to 5MP and the CPU has been downclocked by 300 MHz. These are things, which sure make the Q10 the more desirable package, but not the kind that will dramatically change the user experience. It looks like the BlackBerry Q5 is much closer to the BlackBerry Q10 than its name suggests.

The smartphone certainly lacks the sophistication of the Q10 and even though the plastic used is of decent quality, it’s nowhere near as solid or good looking as on the Q10. Cost-cutting was obviously not limited to the internals – the build and finish were affected too.

Like all things BlackBerry, the styling of the Q5 is respectful of tradition. The spaced-out QWERTY keyboard takes after the Curves, as opposed to the tightly-packed, molded keys of the Bold series – and the Q10. It’s a cleaner, simpler design but not as good looking. Quite unexpected for a BlackBerry handset, the back gives slightly in when pressed harder, producing mild squeaks mostly around the shared SIM/microSD slot. The flap covering the slot feels a bit flimsy itself.

Then again, it would be unfair to the BlackBerry Q5 to only compare it to a clearly premium device like the Q10, which is also one of the handsomest smartphones around. In more general terms, the Q5 is average looking at the very least and certainly not a smartphone you’d be embarrassed to be seen with.

The phone’s back is nicely curved for comfortable handling. The finish is as good as immune against fingerprints and provides for a great, secure grip. It is a well-built device overall, except for the card slot flap.