Motorola last year launched the successors to the Moto G and Moto X smartphones, but left the immensely popular Moto E waiting for an upgrade. Of course, rumours for a while have been pointing towards Motorola working on the successor to the Moto E, expected to be called the Moto E (Gen 2). 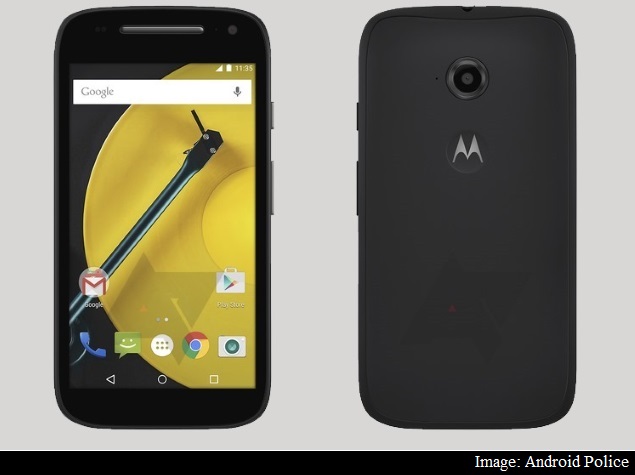 Now, Android Police has posted a couple of press images of the alleged Moto E (Gen 2), showing the front and rear panels of the device with the display turned on. The leaked front panel purportedly shows the Moto E’s successor might pack a larger screen than its predecessor; though seems will not match to the 5-inch display on the second-generation Moto G.

Another notable feature given out by the leaked image is that the Moto E will run Android 5.0 Lollipop out-of-the-box. Further, the front leaked image purportedly shows the handset running single SIM tipping that the handset might come in two variants – single SIM and dual-SIM – unlike the first generation which was only available in a dual-SIM model. The dual-front speaker grille design first seen on the Moto E last year seems to have been changed on the Moto E (Gen 2) as it is seen sporting a single speaker grille above the display.

Android Police points out few more additions expected in the second-generation Moto E, “It does look like the Moto E has picked up a secondary noise-cancelling microphone on the rear cover. It’s also gaining, it would seem, a front-facing camera.”

The publication also speculates that the Motorola Moto E (Gen 2) might be announced at the sidelines of MWC in Barcelona in March. So far, there has been no announcement from the company.

Some of the preliminary specifications of the Moto E (Gen 2) tipped by previous reports include a 4.5-inch qHD (540×960 pixels) display; a 5-megapixel rear camera with LED flash, and LTE connectivity. Earlier reports have also tipped the new Moto E might carry a “very low price”.

We remind readers however, that nothing is official yet, and that all such leaks must be taken with a pinch of salt.