Home >> Latest Phones and Tabs >> Lenovo Tab A7: One of top options for tablets with calling

Lenovo Tab A7: One of top options for tablets with calling 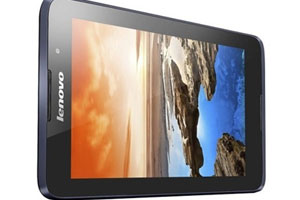 Tablets with calling are once again becoming the vogue in India. Despite the awkwardness of it all, companies confess that a lot of Indian consumers see value in holding a large tablet to their ears to make a call. The latest in the line is the Lenovo Tab A7 (A3500-HV).

Design: The A7-50 is a regular looking Android tablet. But despite being a 7-incher, it can be easily gripped in one hand. The matte finish rear flap also assists the grip, which is crucial for a tablet that comes with calling. The power and volume buttons of the right protrude a bit and are easy to find. There is a side flap to insert the SIM and SD card, while the camera ends up creating a slight bump on the rear.

Screen: The HD screen is one of the first things that impressed me with this tablet. The screen also has a wide viewing angle, which is often a problem for tablets. The screen is great for watching video, but you might need to use a headphone to hear what is happening.

Performance: Performance won’t be a problem for the average user. However, the 1GB RAM will start showing up if you push with high-end gaming. I faced no issues with multi-tasking which was almost seamless, except for the slight pause here and there. That shouldn’t bother anyone. The tab also stays cool most of the time. Camera: This is one of those strange devices in which the front camera actually feels better than the one on the rear. The 5MP camera is okay, and performs decently in good light. The selfie camera seems sharper though. Storage: Out of the 16GB, about 12.6GB is available for the user. You would however want to buy an SD card to store those HD movies. Software: The Android OS has been tweaked to make it easier on the larger screen. So there is no app draw as such. Lenovo has added a few apps for power management and sharing. Yes, you there is FM radio too. Battery: The battery is good and can easily last a full day with use SRC:TFE