Squeezing your flagship smartphone in a tinier, sportier shell is the fad in Android these days. Not the one to blindly follow the pack, Sony has chosen to do things differently. The Xperia ZR didn’t get as far down as the Galaxy S4 mini and the One mini, and got a 4.55″ display rather than a 4.3″ diagonal.

However, unlike its HTC and Samsung rivals, the Sony Xperia ZR is keen to match the oomph of its flagship, offering better IP protection at that. Considering how important dust and water resistance were for the Xperia Z’ success, some may as well consider this one as an upgrade, rather than a trimmed down version. There’s also the proper shutter key – the Xperia ZR comes across as the better photographer too.

The battery capacity has been kept the same, and it’s even user-removable this time. Together with the smaller screen of slightly lower resolution and stamina mode, you get a smartphone that’s not only easier to pocket, but one that will last more than the premium package. Now, how’s that not a winning combo? Here goes the complete list of Xperia ZR pros and cons. 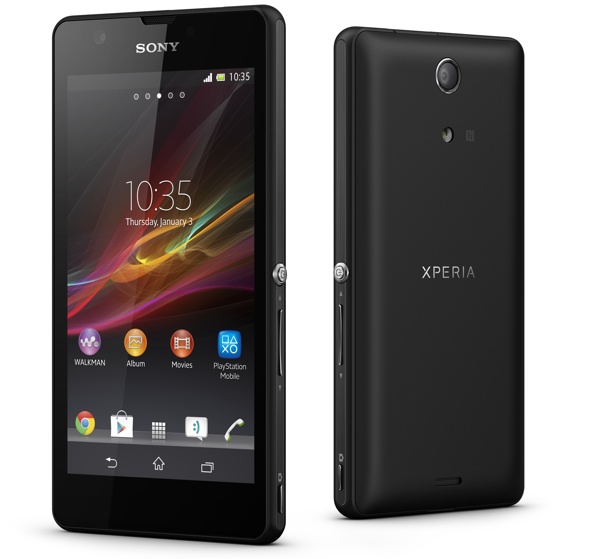 So, basically all you’ll be losing if you chose the Sony Xperia ZR over the Xperia Z is some screen estate, the 1080p front-facing camera and the Full HD display. We wouldn’t call any of those a deal-breaker, though: the smaller screen favors portability and, at this size, 720p is more than adequate. As for the video-call camera, most video-chat apps don’t really support much higher resolutions anyway.

It seems then that Sony has another potential winner on its hands. The Xperia ZR might just be what the company needed to cruise through the next quarter and allow enough development time for the Honami and Xperia Z Ultra, which look like the kinds of projects they wouldn’t want to rush.

Looked from the front, the Xperia ZR is an instantly recognizable member of the Sony smartphone family and a slightly downsized clone of the Xperia Z. However, it lacks the cool looking glass panel at the back, which takes away much of the premium feel and look.

Still the plastic used in its place is of sufficiently high quality, so the Xperia ZR is still a looker. And the matte finish has a serious advantage over what the Xperia Z had – it’s far less prone to fingerprints, so it doesn’t require as much effort to look its best.

The sides of the Sony Xperia ZR have a different glossy finish, adding a second color tone to the exterior. The effect is much more prominent on the two brighter-colored versions, pink and blue, but is also noticeable on the more classic white and black handsets.

The richer color palette is another thing the Xperia ZR has over the Xperia Z – the flagship does have a purple version, but we believe the ladies will prefer the pink of the more compact device.

The final perk of the Xperia ZR design is its removable back panel, which grants you access to its battery. Sure it adds a millimeter or two of thickness and takes away some of the high-end vibe, but we are sure many will find this an agreeable trade.

The layout of controls on the Sony Xperia ZR sticks to what seems the norm across the Sony smartphone lineup.

Starting from the top of the front panel you get the earpiece, with the VGA front-facing camera on one side, and the ambient light and proximity sensors on the other.

Like the rest of its siblings launched this year, the Xperia ZR relies on virtual on-screen keys rather than hardware buttons, so there is nothing to see below the display.The primary microphone has been moved to the bottom of the phone, right next to the lanyard eyelet. The secondary one is at the back, but it’s only visible when you remove the back cover.On the left you get the MHL-enabled microUSB with USB host support. It’s located underneath a small plastic cap, which helps maintain the IP58-required levels of water resistance. There are a couple of dock connectors below the port, too.Jumping to the Xperia ZR’s right side you see the volume rocker, the smartphone’s signature power/lock key and the camera key. The shutter key could have been a bit wider and could have provided more tactile feedback, but it’s certainly something you can get used to quickly enough.

Launching the camera straight from sleep state and enabling more comfortable photo taking without introducing needless camera shake by touching the screen, the camera key is a definite asset. It’s also something the Xperia ZR can use to lure some people away from the Xperia Z, which lacks such a button.

At the top, you get another plastic lid with the 3.5mm audio jack hiding underneath. While the cover does well to keep dust away (in addition to the water-proofing), it does have a somewhat negative effect on its accessibility.

Around back, we spot the 13 megapixel camera lens, the LED flash and the loudspeaker grille. That’s the exact same camera as on the Xperia Z flagship, but we are hoping Sony got the processing right this time (an update was issued for the Xperia Z specifically for that).

Underneath the back cover sit the microSD and microSIM card slots as well as the smartphone’s juice pack.

According to the official numbers, the 2300 mAh battery that should keep the smartphone going for up to 13 hours of talk-time or 520 hours of stand-by. The numbers come slightly short of what the Xperia Z promised, but the real-life performance is a market improvement over the 5″ flagship. The Xperia ZR managed an endurance rating of 62h in our dedicated test, easily beating its sibling in each of the tests and matching its stand-by efficiency.

That’s hardly a surprise considering that the batteries and chipsets are the same and the ZR has a clear advantage as far as screen estate and resolution are concerned. We did experience strange battery drain on a couple of occasions when we left the phone idle overnight, so it wasn’t always so great, though.

The resolution is more than twice lower than on the Xperia Z, but since the screen size has also been decreased so the pixel density stands at the cool 323 ppi. It’s as great as on the Xperia Z, but frankly you’d have to be looking from way closer than is comfortable to notice it. And since 1080p would have lead to an increase in battery consumption we’d say Sony made the right call here.

Brightness is adequate and the contrast looks good even without the Bravia engine optimizations. You can enable the BRAVIA 2 for a dash of extra punchiness to your colors.

Surprisingly, the viewing angles on the Xperia ZR display are somewhat better than those of the Xperia Z screen. It’s still far from perfect and you start to see contrast compression and color shift quite quickly, but the screen remains legible for longer than the Xperia Z.

Using the Sony Xperia ZR in bright outdoor conditions turned out quite a trouble-free experience. The smartphone even managed to slightly outdo the Xperia Z in our test.