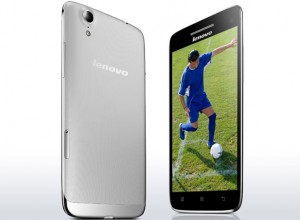 Lenovo on Tuesday launched its first Vibe smartphone in India. Priced at Rs 25,999, the device will hit stores later this week.

The highlights of the device include its thin frame measuring 6.9mm and its weight, 121g, possibly the lightest in its class.

The Vibe X sports a 5-inch full high-definition display that has a resolution of 1080×1920 pixels and a pixel density of 440ppi, sitting under a Corning Gorilla Glass 3 screen bevelled at the edges. The phone is powered by a 1.5GHz quad-core MediaTek (MTK 6589T) processor, has 2GB of RAM, and offers 16GB of inbuilt storage. It runs Android 4.2 Jelly Bean.

The Lenovo Vibe X also has a 13-megapixel (MP) rear camera with a back-illuminated sensor and an LED flash. The front camera of the phone is 5MP.

Built: The Lenovo Vibe X is barely 6.9 mm thick and it weighs about 121 grams which makes it sleek, slim and light weight.

Display: This smartphone features a capacitive full HD IPS touch display of 5 inches that provide a resolution of 1920 x 1080 pixels and a pixel density of 441 ppi. It comes with Corning Gorilla Glass 3 protective screen.

Processor: This device has been equipped with a MediaTek 6589T SoC quad core processor clocked at 1.5 Giga Hertz.

Camera: This smartphone has been loaded with a rear camera of 13 mega pixels with LED flash and auto focus features. It also carries a front facing camera of 5 mega pixels.

Memory: Vibe X comes with a RAM of 2 GB. It features an inbuilt storage capacity of 16 GB; however, it does not have a micro SD card slot for expandable memory feature.

Battery: This smartphone has been powered by a battery of 2000 mAh capacity.

Our Take: The Lenovo Vibe X smartphone is quite a good device. It offers numerous interesting, entertainment and functionality based features that make this smartphone very useful and competent. The price of Lenovo Vibe X is expected to be around Rs 22,000.

Speaking at the launch, Amar Babu, managing director, Lenovo India, said, “The market worldwide has trended towards smartphones and India is no exception, as customers are opting for the latest devices that can perform multiple functions. Globally, we have emerged as the number four smartphone brand. In India, we have made an interesting beginning and we expect our growth trajectory to continue with the introduction of newer models.”

The Vibe X comes with some unique apps, including Lenovo’s “SHAREit”, which enables phone-to-phone data transfer in the fastest possible way. At about 4 Mbps, users can exchange pictures, large videos, and complete folders and even share apps without using any data cable or Wi-Fi hub.

“Vibe X is slimmer and lighter than most phones in its class and packs a slew of unique features, which consumers look for today,” Sudhin Mathur, director-Smartphones, Lenovo India, said.